By Profession, Sri Astakala Narasimharama Sarma garu is a Teacher. He is an acknowledged poet, Ashtavadhani, an expert astrologer. He bears the titles of Avadhana Kala Prapoorna, Saraswatha Shiromani, Brahmi Vibhusana, Kavitha Sudhakara and Kavi Kesari.

At the age of 16 in 1960, Sri Sarma garu had gone to Basara for meditation. He meditated for 56 days. At the end, he was fortunate to have the darshan of Goddess Saraswathi was directed  to go back and take up the task of constructing Saraswathi Temple. Then, at 16, Sri Sarma was too young to believe that it was just not a dream. Hence he could not pursue the task entrusted to him by the Goddess. Later he got a job in the Education Dept. Thus elapsed another 16 years.  In 1976, Goddess Saraswathi has reminded him of the sacred duty he has to perform. Sri Sarma garu met his Guru Sri Akhandananda Saraswathi Swamiji and explained the direction he had received from Goddess. His Guruji encouraged and blessed him to take up the cause of construction of the temple to Saraswathy Devi. Things then followed in that direction.

In 1976 at Narayankhed, Sri Sarma unexpectedly performed his first Astavadhanam 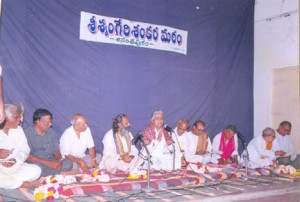 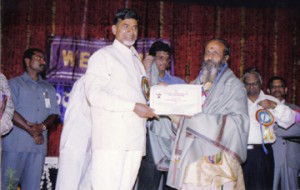 He has written many books in Sanskrit and Telugu. Befitting his scholarship and the service he rendered, he was awarded many titles such as Avadhana Siromani, Brahmi Vibhusana, Kavitha Sudhakara, Kavikesari etc. In recognition of his service as Teacher, the Govt. of A.P. has conferred the Best Teacher Award during the year 2003. 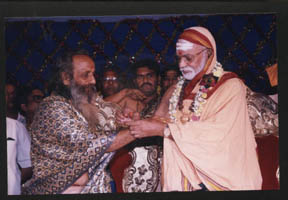 He was honoured with a Swarnakankanam during his Sasthipoorthi celebration, in the presence of Jagatguru Sri Sri Sri Siddeswarananda Bharathi of Courtallam Math during the year 2010,

He was honoured with kanakabhisekham and Thulabaram by his followers. 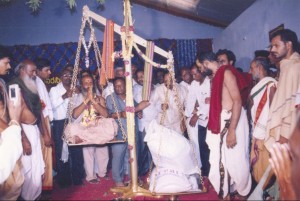 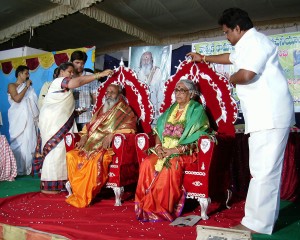 More and more pilgrims are visiting the temple and caves and have darshan of the Goddess. They are also voluntarily coming forward to contribute for the development of the temple at Ananthasagar. Sri Sarma who is the man behind developing such a huge temple, devoted to spread the mission of Saraswathi – the Goddess of Education, is being treated as Walking Saraswathi.

Sri Sarma Garu has missionary zeal to propagate the concept of devotion to the Goddess Saraswathi. Being a Teacher by profession and training, he advocates being simple and useful to the society through Bhakti. He had put enormous efforts to construct this great temple at Ananthasagar. He also has inspired many people to involve in the divine work of construction of Saraswathi temples at various places in almost all Taluk Head Quarters of Medak District and other places in A.P. He had assisted in the construction of these temples and also to install the idols of Goddess Saraswathi and other Gods. He has done all this without expecting anything in return but to satisfy his ambition of popularizing expansion of Saraswathi Temple concept.