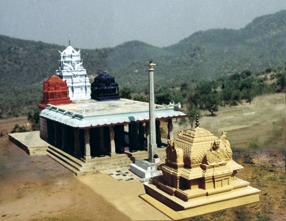 India is a divine land. Throughout the country there are number of Temples devoted to different Gods. Whichever part of the country you visit, there are  temple where in people worship. All the temples are not only famous for attracting devotees but also for the architectural beauty. However, the temples dedicated to Goddess Saraswathi are rare in the Country. The oldest among these is the Vaishno Devi temple in Kashmir. The second famous Saraswathi Temple is the one at Basara (Vasara) in Adilabad District of Andhra Pradesh. Yet another temple, which has come to lime light in recent time, is at Ananthasagar in Medak District of A.P. 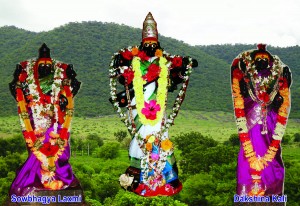 The rarity and sanctity of this temple is that the Goddess Saraswathi in the standing posture with Veena in one hand (Veenapani), a Book and Japmala in the other hands. At Ananthasagar, along with Goddess Saraswathi the other dieties are Sowbhagyalaxmi and Dakshinakali. These Goddesses also are in the standing position. Also there is Sivalingam. Yet another rarity to the sight is Lord Hanuman, facing north, which is most uncommon in India.

The place is called Swethachalam and situated near a village Ananthasagar. It is located on the hillocks of Ananthasagar village on the Rajiv Rahadari – the highway from Hyderabad to Karimnagar and 20 km away from Siddipet town, 40 km from Karimnagar. The place is the north east boundary of  Medak District and on the border of Karimnagar District . The temple is situated 2km from Sanigaram RTC Express Bus stop on the Hyderabad – Karimnagar high way. 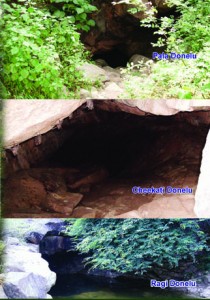 There are three natural water caves at this place. They are : Ragi Donelu, Cheekati Donelu and Pala Donelu. People of this area have a strong belief that these three Donelu having different tastes of water, cure many diseases. People use these waters both for bathing and drinking. The water is always fresh, resembling their names. There are many standing examples of the cure of skin diseases and dumb children being able to talk after bathing in the waters of these caves. People also use these waters to control the crop diseases. Thus, these waters have some medicinal value, useful to the mankind.

People from nearby villages say that in olden days these caves were used by Rishis for their Tapasya and meditation. Scientists have proved that the water at Ragidonelu contain Copper oxide, which is a rarity. It is believed that originally there were eight Caves at this place, but with the efflux of time and due to natural calamities, five had collapsed and only three survived.