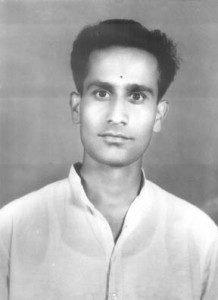 The construction of the temple at Ananthasagar is a divine decision. Without the divine grace and order, no human being could construct such huge complex at Ananthasagar. Yet, some people are instrumental to initiate the work in the pursuit of propagation of Hinduism in this part of the country.

Sri Ashtakala Narasimharama Sarma took on this great responsibility of construction of temple complex to Goddess Saraswathi. By Profession, Sri Sarma is a Teacher. He is an acknowledged poet, Ashtavadhani, an expert astrologer. He bears the titles of Avadhana Kala Prapoorna, Saraswatha Shiromani, Brahmi Vibhusana, Kavitha Sudhakara and Kavi Kesari.

At the age of 16 in 1960, Sri Sarma had gone to Basara for meditation. He meditated for 56 days. At the end, he was fortunate to have the darshan of Goddess Saraswathi was directed  to go back and take up the task of constructing Saraswathi Temple. Then, at 16, Sri Sarma was too young to believe that it was just not a dream. Hence he could not pursue the task entrusted to him by the Goddess. Later he got a job in the Education Dept. Thus elapsed another 16 years.  In 1976, Goddess Saraswathi has reminded him of the sacred duty he has to perform. Sri Sarma  met his Guru Sri Akhandananda Saraswathi Swamiji and explained the direction he had received from Goddess. His Guruji encouraged and blessed him to take up the cause of construction of the temple to Saraswathy Devi. Things then followed in that direction. 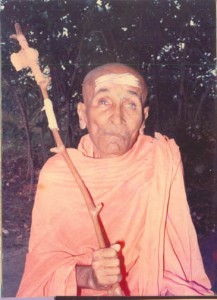 On his approaching, his guruji advised him not to worry as he is only instrumental and the Goddess will provide all the necessary funds and show philanthropists who would help in his divine endeavour. He spent three years in search of a suitable site for the temple to suit the directions he got from the Goddess. At last, he located the one at the Anantasagar hillock area, as the one suitable for the construction of the temple. He had approached Sri Rajalingam, the then RDO of Siddipet for allocation of the said land. Three acres of land was allocated by the revenue authorities. In the presence of his Guruji and RDO, the foundation was laid on 2nd May 1980 for the construction of the temple. Sri Sarma had put all his personal efforts to raise the money for the construction through his own innate capacities of Vasthu, Astrology and Ashtavadhanam etc,. No donations were received at this stage of work.

The two Saints Sri Sri Sri Madanananda Swami and Sri Pundarikaksha swami have advised Sri Sarma that the construction is to be taken up only with stone. Thus, with limited money resources at his disposal combined with the difficulty of availability of skilled labour, the problem of leveling the hillock, stone cutting, finishing and fitting, it had taken unduly longer time than originally thought of.  Undaunted by all these troubles, Sri Sarma never lost his confidence in him and also did not shirk his responsibility to construct the temple complex. 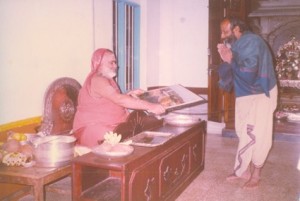 With the blessings of his Guruji and Sri Sringeri Peethadhipati Sri Bharathi Teertha Swami, it has been decided to install the divine idols on 31st January 1990. About 50,000 devotees had the opportunity to participate in this function. There was not any time for Sri Sarma to look back. With the interest, devotion and philanthropic attitude of the people in the nearby places, the work of temple construction progressed steadily. More and more  donors and devotees have come  forward  to  help  this divine cause  started by Sri Sarma.

During the year 2000, Sri Sarma retired from Govt. service. He then had full availability of his time to complete the unfinished work and also to look after the temple to develop it further. He had performed over 160 Ashtavadhanams and offered other services in which, he is perfect, with a prime intention of collecting more money without donations. 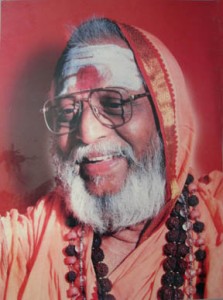 The temple is affiliated to Sri Siddeswarapetham of Courtallam  in Tamilnadu. With the blessings of Jagatguru Sri Siva Chidananda Bharathi Maha Swamigal, Sri Sarma was appointed as the Dharmadhikari to maintain the Temple under their supervision.

Enthused by the selfless service being rendered by Sri Sarma garu, the local MLA’s had facilitated for laying a B.T. Road and to construct a Guest House, Electricity and Water connection to the temple. At present, one huge water tank is also under construction through Govt. funds.